Making a Difference in Their Lives.
We are a non-profit & all breed rescue organization operating in the Baja, Mexico and San Diego, CA areas to rescue, rehabilitate, and rehome cats & dogs. Learn more about

To see all events, visit our EVENT CALENDAR Page.

Check the animal attendance the morning before the event to confirm attendance of a particular rescue. In addition, please check the up-to-date animals attendance list 1 HOUR BEFORE an event to know if the dog or cat you want to meet is still attending.

Not ready to adopt a dog or cat? Have no time to volunteer or foster?

You can still help: a donation is a great way to help ARWOB! Any amount - large or small - is appreciated.

Find out other ways you can donate to ARWOB by visiting our donation page.

We not only provide you with everything you need to take care of one of our rescues, but the experience is SO fulfilling. By placing one animal into a foster home, you allow us to save another. We are always in need of foster parents.

Read more about our fostering program... 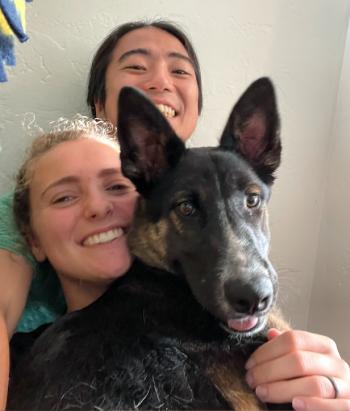 Koda (fka Celtic) was adopted from ARWOB in April 2022. His adoptive mom shared a nice "pupdate" about him. She has told us that they have put together a puppy "meetup" with Koda's brothers Kailua (fka Shamrock) and Ky (fka Leprechaun), as well as his former foster family! This really made our day.

"He is doing great! We changed his name to Koda. He is getting more confident by the day and has become a social butterfly at the dog park. At home, he is a big cuddler. I am a dog trainer so I have been the one training him but he just started additional training at Pack Method Prep this week. He has come so far with his impulse control!" 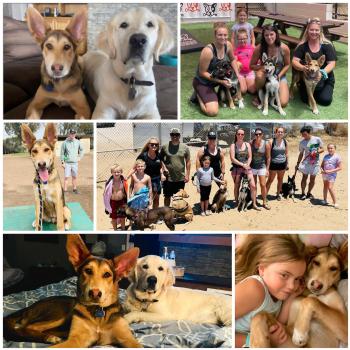 Ky (fka Leprechaun) was adopted in April 2022.  His adoptive mom had this great "pupdate" to share with us.  Not only is Ky living his best life, but he is having play dates with 2 of his brothers from his litter!  We are over the moon with happiness.

"Ky is a perfect addition to our family! He is suck an amazing puppy and has the biggest heart! We have gone to fiesta Island a few times, dog parks, restaurants and he walks my daughter to her classroom door every day for school. His recall is absolutely amazing and he is such a smart boy! We also do play dates with his brothers Kai (Shamrock) And Koda (Celtic).  He is super loved!" 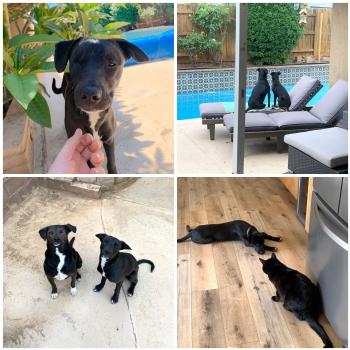 Arty was adopted from ARWOB in April 2022.  His adoptive dad share this nice "pupdate" with us.  It looks like Arty is enjoying his canine sibling a great deal.  Just look at the two of them sitting on the chair by the pool!  Arty even has a feline sibling!

"Thank you for checking! Arty is doing very well! He has definitely found his place in our family and is such a sweetheart. We have puppy training camp starting this week and have done a little training at home with him. He’s a quick learner!" 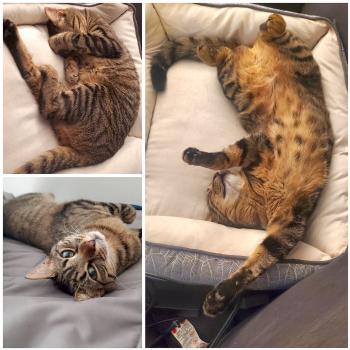 Everyone has a furry soulmate, right?  We can prove it with the story about Babs, a VERY spicy kitty that was under our care for nearly 16 months. Babs has a very feisty personality. She just needed to meet "the one" and it finally happened! Babs was fostered for close to 3 months and her foster mom realized she actually fit in perfectly with her lifestyle and she couldn't imagine Babs being adopted by anyone else. Her foster mom turned into her adoptive mom and made the adoption official in April 2022. We just had to share the update that her adoptive mom sent to us!

"Babs is doing great! She's the sweetest cat! She loves looking out the window of my apartment and people watching all day. I also think that the longer I've had her the less she is biting. There are very few times she does it now. I think part of that comes from being familiar with each other now to know what is okay and not okay on both sides. Her favorite toy is this bright pink fluffy feather wand... hours of entertainment. I'm super happy I decided to adopt her!" 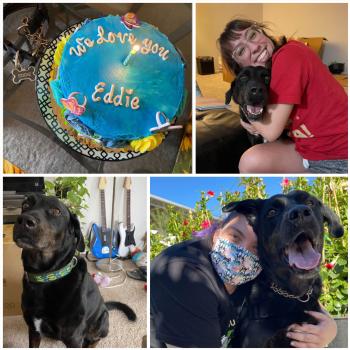 Eddie's story is one worth shouting out!  He had been previously adopted when he was a young dog and then relinquished back to ARWOB because his former adopter could no longer care for him.  Being that he was a senior boy when he came back to us, it was harder to find a forever home for him. Luckily we had a long term foster that gave Eddie all the love he deserved.  As time went on, his foster realized she was ready and able to make him a permanent part of the family and officially adopted him in April 2022!  She shared this fantastic "pupdate" about Eddie:

"Eddie is doing great! He is happy and goofy as ever! After the adoption it was as if nothing had changed! We already had a set routine, the adoption just made it official."